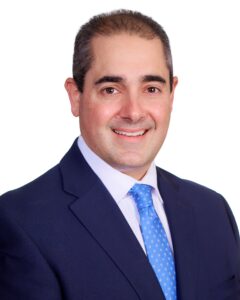 Dr. Christopher Peters is a partner in Radiation Medicine Associates of Scranton (RAMAS.) He is medical director of Northeast Radiation Oncology Centers (NROC) as well as its director of clinical research.

In 2012, Dr. Peters joined the Board of Directors of the Northeast Regional Cancer Institute (NRCI), and served as Board Chairman in 2017 and 2108. He is an Associate Professor of Medicine at Geisinger Commonwealth School of Medicine and Director of its 4th year elective in Radiation Oncology. Dr. Peters has served as the physician Co-Chair, Health Care Division, for the Annual United Way Lackawanna and Wayne County Annual Campaign from 2012 to the present. He was elected President of the Lackawanna County Medical Society in 2016.

Appointed by PA Secretary of Health Dr. Karen Murphy to the Pennsylvania Prostate Cancer Task Force in 2015, Dr. Peters is one of only two radiation oncologists in the Commonwealth to be selected for this 15-member task force.

In 2014 and 2015, Dr. Peters was an invited team member of the collaborative initiative to create an oncology Palliative Care Plan for the state of Pennsylvania. This initiative was led by the American Cancer Society in partnership with the Comprehensive Cancer Control Coalition of the Pennsylvania Department of Health.

Dr. Peters is a graduate of the University of Pennsylvania and received his Doctor of Medicine degree from Case Western Reserve University, Cleveland, where he was elected into the Alpha Omega Alpha national medical honor society. After completing an internship in Internal Medicine at Case Western Reserve Metrohealth, he performed his Radiation Oncology residency at Mount Sinai Hospital, New York City, serving as Chief Resident in his final year.

Dr. Peters is board certified in Radiation Oncology and his clinical research of prostate cancer yielded him the 2006 Clinical/Basic Science Research Award from ASTRO, the American Society for Radiation Oncology.

Dr. Peters has published numerous scientific articles in translational and clinical cancer research. He has served as an invited lecturer in several venues, including the Pennsylvania Cancer Control Conference, Pennsylvania Association of Cancer Registrars, Thomas Jefferson University, and the Geisinger Commonwealth School of Medicine.

The team of health care professionals at Northeast Radiation Oncology Centers (NROC) is dedicated to providing care for all patients and their families based on:

The team of health care professionals at Northeast Radiation Oncology Centers (NROC) is dedicated to providing care for all patients and their families based on: